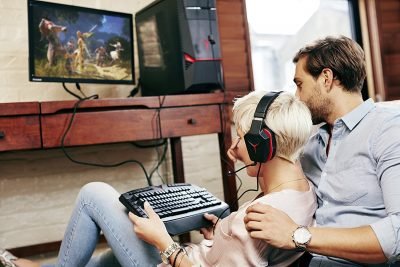 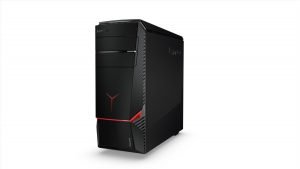 Lenovo Ideacentre Y700 (90DG0021US) desktop first appeared on Amazon.com in October 2016 as a powerful and modern gaming / multimedia desktop, with a very current design in black and red accents at the front, a very advanced and capable dedicated graphics card, a powerful sixth generation Intel i5 processor, a hybrid storage of HDD and SSD for both large size and high speed and more. It seems to be low in price despite offering such high specs for great gaming of advanced and very demanding games at high frame rates per second and is a VR-capable laptop.

So the technical specs include the quad-core Intel i5-6600 graphics card at 3.3GHz to 3.9GHz speeds with turbo boost and a Passmark benchmark score of 7719 which makes it a very capable processor for both daily and demanding tasks, 8GB DDR4 memory for great multitasking power, a hybrid drive of 1TB SATA hard drive at 7200rpm rotating speed for data and 128GB Solid State Drive for programs (there are a total of four 3.5 or 2.5-inch drive bays) and the Windows 10 operating system. You can upgrade it without needing any tools, by opening the left side panel easily which also includes a transparent grille and as it has a clean interior with the cable routing inside so you can focus on your games. 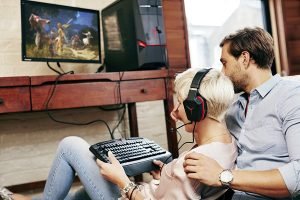 8GB memory is included and you can upgrade it to a total of 32GB on four slots and not sure if you would need to upgrade the 1TB + 128GB SSD hybrid drive or the GTX 1070 which already offers quite a lot of performance and power for gaming and multimedia editing. NVIDIA GTX 1070 has the 8GB GDDR5 dedicated memory and a video card benchmark score of an impressive 11,000 at the time of this review making it the fifth most capable graphics card in the world. Lenovo Y700 has a total of ten USB ports and four of these are USB 3.0 ports (and 6 x USB 2.0 ports), a 7-in-1 Media Card Reader, 802.11ac wireless, Ethernet with the RJ-45 connector for wired internet, an HDMI output, a VGA output, PS/2 and Microphone/Headphone.

It weighs 33 pounds and measures 18.86 x 8.15 x 19.84 inches- is a large standard desktop size but medium size for a gaming machine and will need to be located under or next to your desk pretty much permanently. Well, it is not the most powerful gaming desktop on the market, as you’ll find some models can cost thousands of dollars but for the entry to lower mid-range price level concerned you are getting quite a fast and powerful machine. It has kind of a simplistic design in all black chassis and red accents that emit a red glow with the LEDs inside and outside at the front and this may seem like much for a regular desktop but nothing as compared to those that light up all over- this is somewhere in the middle, with its sharp angles that are pretty much common to gaming machines. And it is not very beautiful inside like some of the very expensive machines and includes a standard cooling system as it is not a masterpiece either. But overall you’re getting much more than what you’re paying.