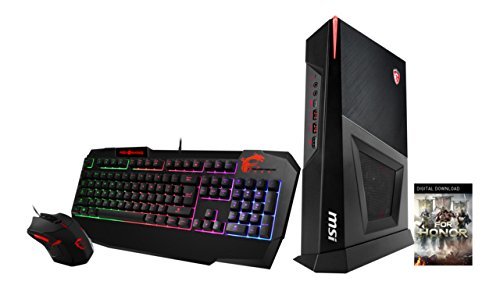 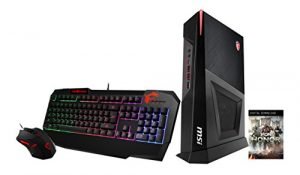 MSI Trident 3 VR7RC-020US is an early 2017 model VR Ready mid-range gaming desktop with the high end GTX 1060 graphics card for Full HD and WQHD gaming with innovative new technologies, decent connectivity options including a front access Virtual Reality port, an Ultra 4K resolution, a very large storage space and a futuristic ITX ultrasmall form factor design with both the horizontal and vertical orientation. It is promoted as the smallest gaming PC in the world and promises and offers very high desktop performance in this very compact design. It comes with the quad core Kaby Lake Intel i5-7400 processor (6MB smart cache) between 3.0 and 3.5GHz speeds with turbo boost (4 cores and 4 threads) and Intel H110 chipset motherboard, 8GB DDR4 RAM at 2133MHz that gives it a decent multitasking power for running many browsers, apps and software at once, 1TB = 1024GB SATA HDD mechanical drive at 7200rpm spindle speed that lets you open your files a bit faster than the 5400rpm machines and you can always put in an SSD for much more speed and the Windows 10 operating system.

VR stands for Virtual Reality as you may already know and it requires quite a specific set of computer components on a new release machine that costs at least 1000 dollars at the moment with an average of 2000. The July 2016 release NVIDIA GeForce GTX 1060 has an impressive video card benchmark score of 8773 that makes it rank 12th in the world out of all the GPUs available on the market and 3GB of GDDR5 dedicated memory, so you can play all the latest release games of years 2015-2016 at high settings with decent frame rates per second. And the great ultra 4K resolution is equal to sharper and clearer images, games and movies. Trident 3 has a special cooling system to help it stay cooler after long sessions of gaming, a special design cooler with special fan blades that allows more air flow and makes less noise so the unit stays cool and quiet. The 3D Nahimic Sound System will deliver a very decent audio experience for virtual gaming, so as you hear better you will play better and this will affect your overall experience with movies, videos, music, games or any multimedia content.

MSI Trident 3 also includes the Intel HD 630 built-in graphics card that shares the memory with the main processor, and that is suitable for only the light and less demanding games. The system uses it for less demanding media tasks to help you save on power usage and switches to the GTX 1060 automatically when it needs more power for advanced gaming or multimedia editing. With the “MSI Mystic Light for Desktop” feature, you can actually customize the appearance of your desktop by selecting one of the colors on the palette and with 4 to 8 LED effects. With a benchmark score of 7366, there is not a lot you can’t do with the Intel i5-7400 processor that can handle the most demanding tasks easily. You have two other options on the Amazon product page, both of which include an Intel i7-7700 processor and 1TB hard drive but these are actually hybrid drives, the first one also has a 256GB SSD plus 16GB memory and the second one also has a hybrid drive with a 128GB SSD and 8GB memory. Even this entry level Trident 3 with a modest price tag is packed with modern innovative features for the best of gaming and work performance and this is certainly a computer that we don’t hesitate to recommend if you’re a power user or an avid gamer.