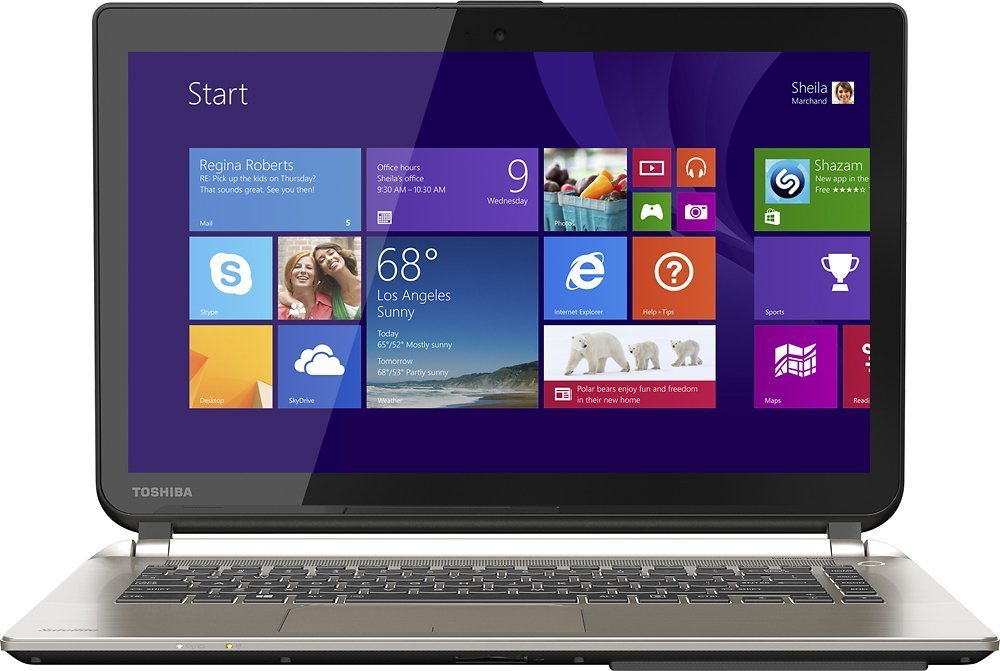 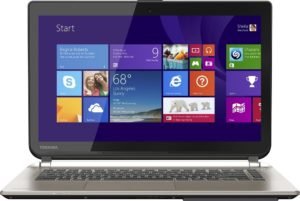 Toshiba Satellite E45T-B4106 is the new 2015 model 14 inch laptop with high end specs and features such as FHD touch display for great sharp picture quality, backlit keyboard for comfy typing in the dark, large memory and hard drive for multitasking power and ample storage space, the fast and powerful Broadwell Intel i5 processor and lightweight and compact with slim and modern design at quite a reasonable price for all that it has. Toshiba Satellite comes with the dual core Intel i5-5200U processor (3MB cache) at 2.2GHz to 2.7GHz with turbo boost and hyper threading for dual cores to work with four threads in parallel, 8GB DDR3L SDRAM memory for plenty of multitasking power for almost anyone and that is expandable to maximum of 16GB, 1TB Serial ATA hard drive at 5400rpm spindle speed as very large space for storage but standard speed that is much slower than SSD (more info on RAM and HDD upgrade is below) and 64-bit Windows 8.1 operating system.

14 inch LED-backlit TFT high definition widescreen touch display with TruBrite technology with 1920 x 1080 pixel resolution for clearer and sharper images and Intel HD 5500 graphics that lets you play the latest games at lower settings and FPS and older titles at higher. You have the integrated decent HD quality webcam with dual microphones on top of the screen for video conferencing or chatting live on Skype. 14 inch screen size is only a little smaller than the most common 15.6 inch display but also means even better use of the 1920 x 1080 pixels as they will be distributed on a smaller display. Touch function seems to work well and is great to have for easier navigation of Windows 8 functions- the newer Windows 10 will also be touch compatible. For great sound you have the DTS Sound and Harman Kardon speakers which are great when you’re playing songs, videos or games.

Brushed aluminium finish satin gold Toshiba Satellite weighs 4.5 pounds with dimensions of 13.50 x 9.60 x 0.85 inches offering portability- sleek, lightweight and compact. Raised tile Trutype LED-backlit keyboard enables you to work more comfortably in dim light. There is no DVD Optical Drive as this is quite a slim laptop (you need to use an external drive which can be purchased cheaply) and no VGA port, 2 x USB 3.0 ports, 1 x USB 2.0 port, Multiformat Media Card Reader that supports SD, SDHC, MMC, miniSD, microSD and microSDHC if you have data on memory cards, dual band higher speed 802.11ac wireless + Bluetooth 4.0 to connect with other Bluetooth enabled devices, 10/100/1000 Gigabit Ethernet LAN with RJ-45 connectivity, Intel WiDi Wireless Display capable which means you can transfer multimedia directly from your notebook to you large screen HDTV without needing a cable (content both online and on hard drive), an HDMI output to connect to an external monitor or a HDTV with one HDMI cable for video and audio and supports 4K UHD output. 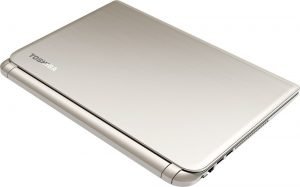 Conclusion: Toshiba Satellite E45T-B4106 is suitable for both business and play at home, school or work as the ultra low voltage processor is both powerful and energy efficient. 8GB (2x4GB) is plenty for most computer users and can be upgraded up to 16GB (you need to remove the existing RAM prior to upgrade) if you will be using the computer for multitasking of a lot more demanding tasks and a terabyte of storage is a lot of space for all your multimedia files and if you’d like an SSD instead of this large HDD you can install it by first removing the hard drive. Ultra low voltage processor helps with longer battery life but the Passmark benchmark is at 3559 at the time of this review which is not too bad but not as powerful as some i5 processors you are used to but it is still quite a capable one and will run your software without delays or freezing, also thanks to the 8GB memory- you can expect the battery life to be around 4 hours from its 4-cell battery. Keyboard is backlit but doesn’t come with a 10-key numpad on the side if you prefer it but once you’re used to without numpad, it feels like it goes in your way. Fans are located at the bottom so you don’t want to put it on a soft surface like a pillow on your lap. Adobe Reader, Dragon Assistant Voice Recognition for easy voice commands, 1 year McAfee Live-Safe subscription, 1 month trial of Microsoft Office 365 are included as software in the package. Overall we think that it has a lot going for it and Toshiba is a reliable brand.