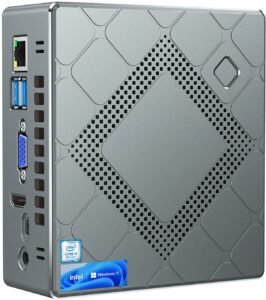 The average user rating is 4.5 out of 5 stars by 30 customers at the time of this product review. The same mini PC is available with a smaller storage of 256GB SSD and you can check the current prices and availability on the Amazon product page. It is specifically designed for business use but can also be used as a home entertainment machine. The quarter two of 2019 release ultra low voltage quad core Coffee Lake Intel i5-8279U processor (6M smartcache & 8 threads simultaneously with hyperthreading) runs at the speeds of 2.4GH that goes up to 4.1GHz with the turbo boost function.

The average CPU Passmark benchmark score is 8034 for an advanced overall performance. The typical TDP- Thermal Design Power is 28 watts and much higher than the common 15W for similar quad core processors but uses the CPU and GPU Turbo better. It has the dual channel DDR4 memory controller, VP9 and H.265 video decoding and Intel Iris Plus 655 has the 128MB eDRAM memory. It performs better than the Intel i7-8650U processor especially during the sustained workloads because of the increased TDP. It offers great, responsive and smooth performance for different business and home applications in different scenarios.

Both the 16GB DDR4 RAM and the 512GB NVMe M.2 SSD are both generous amounts for multitasking power, local storage and speed. You can open your files swiftly and have a few apps and browser tabs running at the same time. Windows 11 Pro is pre-installed on this machines and comes with the security and business 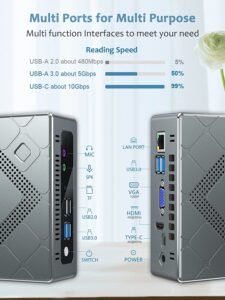 functions as well as the usual Window 10 Home stuff. The integrated Intel Iris Plus 655 GPU performs similar to the NVIDIA 940MX or 930M because of the fast eDRAM cache. You can play the modern, more demanding games smoothly at the low to medium settings.

Connectivity options include the 802.11ac dual band WiFi, Bluetooth 4.2, 2 x USB 2.0 ports, 4 x USB 3.0 ports, a USB Type-C port with 10Gbps super speed data transfer and 4K UHD support at 60Hz, HDMI output (4K at 30Hz) and VGA output for triple display support. You can use it with TVs, projectors, monitors or for kiosk displays, workstations, digital signage or POS terminals. It comes with the fingerprint reader for security. It is a lightweight and compact PC that weighs 3.19 pounds and measures 137.5mm x 126mm x 50mm and won’t take up much space on your desk or attach it to the back of your monitor or TV with a VESA mount.

With the Smart Power On and Auto Power on your mini desktop stays up to date. In the box you’ll find the mini PC, power adapter, 2.5HDD cable, HDMI cable, screws, VESA mount and user manual. It has a single memory stick of 16GB and for the upgrade you need to replace it with a 32GB. The storage space is expanded up to 2TB with 2.5″ SATA HDD or M.2 SATA SSD/Nvme SSD interface. You can expand the storage through the micro SD card as well if you don’t want to do the upgrade internally. The fans may get a bit loud under heavy loud but reasonably quiet for the daily light tasks. March 10, 2022 is the date it was first available at Amazon.com and is currently listed in the top 100 best selling mini computers.