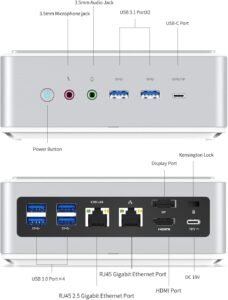 It is also available with Ryzen 9 5900HX with 16GB or 32GB RAM options and UM350 model with the Ryzen 5 3550H and 16GB RAM on the same product page. The quarter two of 2020 release 8-core AMD Ryzen 9 4900H processor (8MB L3 cache, 16 threads with hyper-threading) with the Zen 2 microarchitecture has a base speed of 3.3GHz that goes up to 4.4GHz with the turbo boost function. It is a high performance processor with a faster response speed, lower energy consumption and TDP- Thermal Design Power of 45 watts. With an average CPU Passmark benchmark score of 19343 it can handle all the demanding tasks and gaming.

32 GB DDR4 SDRAM (2x 16GB) is a large amount of memory for a great multitasking power and will help increase the speed of data transfer and you can upgrade it to 64GB. 512GB M.2 PCIe Solid State Drive can also be upgraded through the  2x 2.5 inch SATA HDD slots if you need more storage space. Windows 10 Pro 64-bit operating system is pre-installed on this mini computer and comes with the additional business and security functions as well as all the great features of Windows 10 Home. You can also upgrade it to the latest Windows 11 with an even more user friendly interface, rounded corners and taskbar in the centre.

EliteMini HM90’s Ryzen 9 5900HX has the built-in AMD Radeon RX Vega 8 graphics at 1750MHz frequency with a current video card benchmark score of 1552 and an overall performance level between NVIDIA 940MX and MX150 or Radeon Pro 450 and 555. You can play the low demanding smoothly: Quake Champions at high settings and up to FHD resolution, CS:GO and League of Legends at medium, Overwatch and Data 2 at low settings. EliteMini HM90 supports three displays at 4K Ultra HD resolution at 60Hz refresh rate through the DisplayPort, USB-C and HDMI if you want to work on two or three screens and multi task efficiently.

The EliteMini HM90 has an all metal frame, weighs 4.57 pounds and measures 5.9 x 5.9 x 2.2 inches. For VESA mounting you’ll get a plate in the box for mounting the mini PC to and the plate can be attached to a Vega mount through the holes. Mounting is generally easy and this computer being very compact you shouldn’t have any major problems. With the high thermal conductivity and effective heat dissipation with the mesh structure on both sides and liquid metal, you can expect stable operation long-term without needing to worry about the thermal runaway.

Connectivity options include the dual LAN WiFi, Bluetooth, Gigabit Ethernet(1000Mbps) port, Gigabit Ethernet 2.5(2500Mbps) port, a HDMI port, a DisplayPort, a USB Type-C port, 4 x USB 3.0 ports, 2 x USB 3.1 ports, 3.5mm microphone jack, 3.5mm audio jack and DC 19V. You can connect different devices for your different application scenarios. You can expect decent sound, graphics and overall performance when editing photos, streaming or watching the UHD videos or browsing the web pages from the HM90. The faster response when under high load helps decrease the heat and improve the battery life when under lower load. You can use it as a mini server, media centre, home office computer, for office apps, photo editing and more.