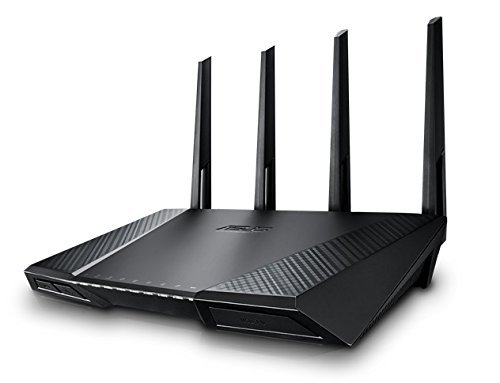 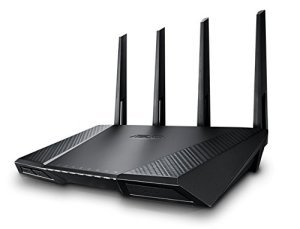 ASUS RT-AC87U Wireless-AC2400 is an amazing dual band gigabit router with a stealth fighter jet design inside and out with understated curves and seems to offer so much power and sophistication, inspired by the G-series gaming laptops. As soon as you start using it, you’ll realise how much work- research and development, hardware work, compliance tests, massive amount of formal work and so much effort has been put into creating this router..

And what you get is a super powerful one with functionality that was never offered before. ASUS RT-AC87U runs faster than ever before with more control and optimization options. It comes with 2 x dual core processors and 802.11ac fast wireless guarantees solid multitasking for all your connected devices simultaneously. With the USB 3.0 port at the front, you can experience up to 10 times faster transfer speeds, USB printer sharing, storage devices, connect 3g ad 4g mobile broadband and make time machine enables backups.

ASUS AiCloud 2.0 is your personal cloud to access, sync, share and stream your data anytime anywhere with router to router synchronisation, you can expand your personal cloud even further with web based interface instantly set-up 87U and control whole router settings via PCs laptops smart phones or tablets. It offers the world’s first 4×4 antenna design that extends wireless coverage up to 5000 squared feet, which is 33% more coverage than 3×3 than antenna routers and even further than latest triband routers. The 4×4 antenna design delivers ultra-fast speed of 1.7Gbps speed- the world’s fastest in 5GHz, eclipsing any router available today.

ASUS AiRadar intelligently strengthens wireless connectivity using universal beamforming technology for fast and stable wireless connectivity, it offers the power for the most bandwidth intensive tasks, making it the ideal router and multiple 4k streaming delivers the smoothest online gameplay. It is multi-user MIMO ready enabling simultaneous wifi transfers up to 200%. ASUS Router has the adaptive QoS that intelligently learns and optimizes bandwidth to your preferred tasks- to identify and categorise home network traffic by intelligently adjusting bandwidth between each device- to spy on people at home : ) 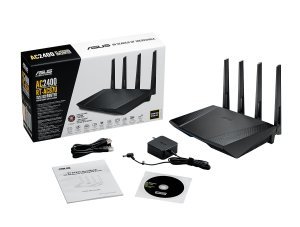 Multi-user MIMO support is only on this one, it offers the furthest range, the most robust performance, hardware with all the key specs you would want in a router, a unique dual core dual design implementation, true performance while using wireless and storage at the same time. It is a big step up in wifi performance- the very first to support 4×4 of the 802.11ac wifi- top speed on the 5GHz band of up to 1734 Mbps and top speed on the 2.4GHz band of up to 600Mbps. It is a very powerful one running at 1Ghz and 500Mhz, it also has 128MB of flash storage and 256MB of system memory. A sustained speed of 1Ghz speed in the world can be enjoyed with all the existing wireless clients regardless of their standard can enjoy and the longest effective range seen so far as well as a very user-friendly interface that is fun to use.

Asus AIProtection with Trend Micro delivering real-time network monitoring instantly raises and alerts any suspicious activity on your Wifi. As minor cons, firstly the design has certain flaws: It is very big and has only 4 landports despite its size and the USB 3.0 is not at the back. And the lights a the front are facing down and if you look from above, they look like they are turned off. And it is obviously quite an expensive unit, which does not mean it is not worth it, because it certainly is! ASUS RT-AC87U is a very special ultra high performance router- the most complete 802.11ac wireless router so far with its 4×4 antenna design, outstanding range and great performance.