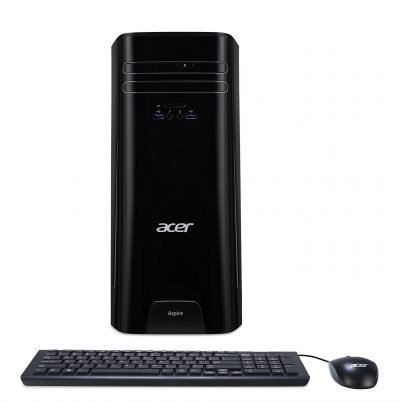 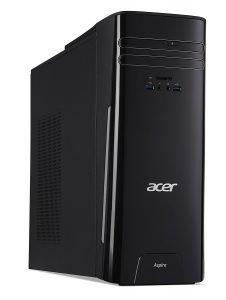 Black Acer Aspire ATC-280-UR11 is a late 2016 model, mid-range Windows 10 desktop PC with mid-range to high-end specs, including very large storage and memory, a capable quad-core AMD A10 series processor with a benchmark score of 5097 which makes it a high-end CPU and can be compared to the fourth generation Intel i3 processors. Technically speaking it is well above average with the quarter two 2014 release AMD A10-7800 processor a 3.5GHz to 3.9GHz with turbo boost and no hyper-threading as it already comes with 4 cores to work with 4 threads in parallel, 12GB DDR3 SDRAM UDIMM memory at 2133MHz for the best of multitasking that will meet the needs of great majority of computer users, a massive 2TB SATA HDD mechanical drive at 5400rpm spindle speed and the usual Windows 10 that you see on almost all of the current desktop models. 5400rpm is not the fastest speed for had drives but you can certainly put an SSD in if you want an improved performance and a much faster opening of files and quicker boot-ups, but Windows 10 already starts up faster than previous versions of Windows operating systems.

After plugging it in, you may have to wait for a little for the Windows 10 updates, but we ‘re not sure if this is the case for everyone. Black Acer Aspire (DT.B68AA.001) weighs 18.43 pounds and has the measurements of 17.43 x 6.89 x 15.67 inches- average weight and size and like any desktop tower of this type, it will probably need a permanent place near your desk. You’ll get a wired mouse and keyboard included in the box, but not the monitor. The built-in graphics card AMD Radeon R7 Kaveri with 512 cores is quite all right with better performance than most Intel HD graphics cards including the Intel Iris Pro despite not being a discrete card with a dedicated memory of its own. It will give you mid-range gaming performance at a regular HD resolution and acceptable frame rates per second and regular multimedia and you’ll be OK with video streaming, multimedia-heavy internet browsing and some photo and video editing but not the latest games at high settings. The sound performance will rely on the external speaker quality with the included 5.1-Channel HD Audio. It supports max resolutions of 4096 x 2160 @ 30 Hz with HDMI and 1920 x 1200 @ 60Hz with the VGA port. 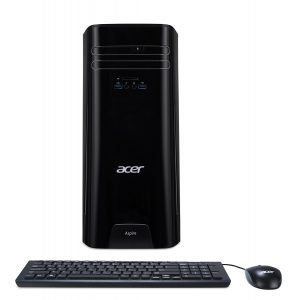 It comes with an 8X DVD-SuperMulti Drive, 802.11ac wireless (better internet connection and more coverage), Bluetooth 4.0 LE, Gigabit Ethernet, a total of 4 x USB 2.0 ports, and 4 x USB 3.0 ports, an HDMI output with HDCP support and a D-Sub VGA port, an SD Media Card Reader, Headphone and microphone ports. Thermal design power is 65 watts which is normal for a powerful desktop PC (PSU wattage is 300W) and it doesn’t run on battery power so you don’t need to worry about battery performance. It runs quietly even under heavy load and is certainly a reliable machine with great modern specs and features at a reasonable price. 12GB memory occupies both slots, 8GB and 4GB and the system supports up to 32GB with two more slots free to use. You can also upgrade the 2TB storage with a free 3.5-inch bay included but who would really want to do that? This is a good computer for family, student, home or even work use as it will be able to handle both the daily and challenging tasks easily, with also pretty good graphics performance for an integrated CPU. Warranty included is 12 months for labor and parts by the manufacturer and a toll-free customer and tech support.