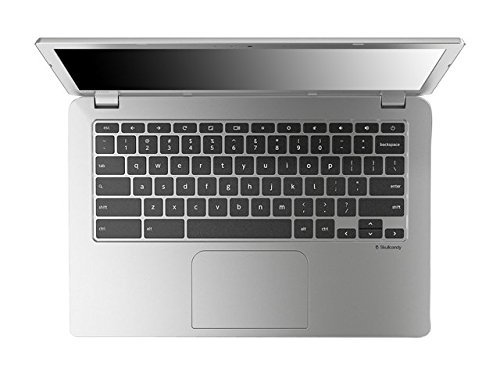 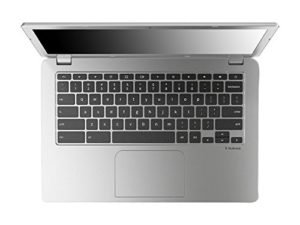 On this page we’ll review the new release 2016 model Toshiba Chromebook with a 13.3 inch Full HD display and see why it costs a bit more than other Chromebook’s we’ve reviewed so far. Firstly, as we mentioned, it comes with a nicer and larger 13 inch FHD display with higher resolution and IPS panel with larger viewing angles and secondly it has 4GB memory at 1600MHz for better multitasking rather than 2GB that is common to many budget Chromebook’s, then the “ac” type faster WiFi for better internet connection than the “bgn”. Other technical specs include the entry level but modern- end of 2014 release dual core Intel Celeron N2840 processor (1MB L2 cache) with a benchmark score of 1048 at 2.16GHz up to 2.58GHz with turbo boost with overall performance levels better than previous Intel Atom’s, 16GB eMMC Solid State Drive which is very small but fast as you will rely mostly on stuff on the internet and Cloud storage rather than a built-in storage (this is the way Chrome machines are made) and you get a free 100GB Google Drive storage.

And the operating system is the Chrome OS that looks just like a Chrome browser and includes some online apps that are substitutes of Windows programs and you will not be prone to viruses as much because you have the built-in protection and constant operating system updates in the background without you having to do anything manually. Graphics card is the Intel HD (Bay Trail), has a reasonable high definition webcam for live chats on Google Hangouts or taking still snapshots. Silver Toshiba Chromebook is not particularly pretty looking but has a solid build quality, weighs less than previous models at just under 3 pounds- 2.95lbs to be exact, with dimensions of 12.6 x 0.8 x 8.4 inches- slim, lightweight and compact. It doesn’t come with an Optical DVD Drive but includes the dual band 802.11ac wireless with Bluetooth 4.0, a full size HDMI output to view your stuff on your large HD screen, a USB 3.0 port, a USB 2.0 port (it used to have 3 USB ports), a 1/8 inch Headphone/Microphone Combo Jack, a 5-in-1 Media Card Reader that supports SD, microSD, MiniSD, SDHC and SDXC, Kensington lock slot, two microphones and two integrated stereo speakers for decent sound from such a compact machine.

13.3 inch LED-backlit non-touch Full HD display has the 1920×1080 pixel resolution with a max resolution of 1080×1024, the brilliant 340 cd/m2 brightness and 16:9 cinematic aspect ratio. You can obviously not download or use Windows Microsoft programs like Word or Excel but you can download MS Office Online or open Office files with Google Docs or Quickoffice Editor. It comes with a 3-cell 44Wh lithium polymer battery that will give you up to 9 hours of battery in theory and this wouldn’t be much less in practice even though the screen is Full HD, as you have a compact system with a low TDP of 7.5 watts- a power efficient operating system but the battery is non-detachable so keep that in mind. You have more screen to view your stuff comfortably than an 11 inch screen yet without the added bulk of a 15.6 inch machine and FHD rather than regular HD screen will let you see things clearer and let you open two windows side by side but it also means smaller texts and u may need to zoom in to be able to see things clearly. It is suitable for simple everyday tasks and mostly for internet use and internet games and simple word processing and other tasks as this is a lightweight Chrome machine with a compact case and long battery life rather than super processing power of some higher Windows laptops.