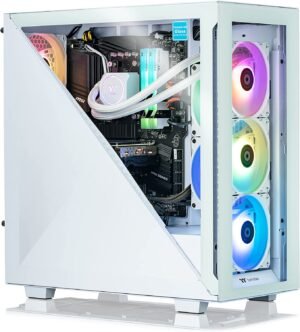 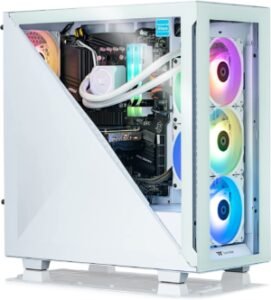 You have the two other options with the 12700KF | 3070 Ti | 32G DDR5 and 12900KF | 3080 Ti | 32G DDR5 with much higher prices that you can view on the Amazon product page. These models were first available at Amazon.com on February 10, 2022 and we don’t have many customer reviews so far. Avalanche 360T by LCGS offers the closed loop TT cooling and high speed performance of both the advanced Ryzen 5 5600X processor and the RTX 3060 Ti graphics card with the very high frame rates and resolutions supported in modern games.

Divider 300 TG Snow Edition is a unique case used in the Avalanche series. It has the symmetrical triangular side panels that give you an impression of a snowy slope. The PSU Power cover comes with the filtered ventilated vertical side mount radiator support. The motherboard include 4 memory slots if you wish to put more RAM in. The fans are connected to the motherboard directly and a bit loud as they run at full speed and you can lower the voltage of the ch fan head which will also decrease the fan brightness.

You have a decent capacity local storage space with the 1TB NVMe M.2 SSD for saving your games, videos, music and other files. Windows 10 Home operating system is pre-installed on this 2022 release machine and you can upgrade it to Windows 11 with an even more user-friendly interface with the rounded corners and taskbar in the middle like on Mac OS. The quarter 4 of 2020 release 6-core 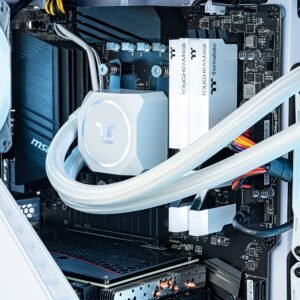 AMD Ryzen 5 5600X processor (12 threads with hyper-threading) works at the speeds between 3.7GHz and 4.6GHz with the turbo boost function. The typical TDP- Thermal Design Power is 65 watts and the average CPU Passmark benchmark score is 22071.

Connectivity options include the 5GHZ wireless, Bluetooth, 3 x Display Ports, an HDMI output, 2x USB 2.0, a USB 3.0, a USB Type-C port, a headphone, and a microphone port. It comes with a Wifi/Bluetooth adapter with two antennas. This tower desktop does not come with a mouse and a keyboard and it is just the tower desktop with a user manual. This powerful desktop is capable of handling whatever you throw at it. And you can play with the settings and set it up to the way you want. You can play all the demanding AAA game titles at the maximum settings and resolutions without issues. It is best that you update all the drivers and firmware before starting to use it.