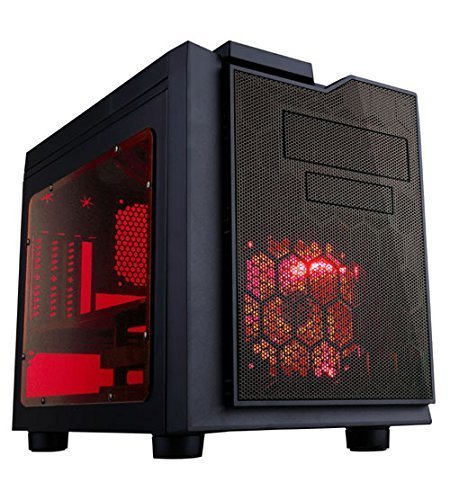 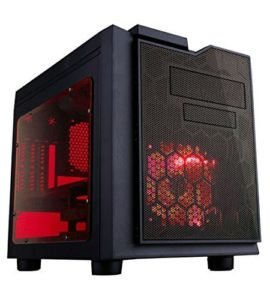 SkyTech HellFire is the new budget priced AMD office and gaming desktop with a rather unique larger and boxy design for small spaces and high end technical specs and features, enhanced processing power with the upper range 12 core AMD A10 processor (4 cores for the CPU and 8 cores for the GPU) with a current benchmark score of 5563 and R7 240 graphics card for adequate gaming performance that is slightly better than Intel Iris Pro 5200 that 21.5 inch Apple iMac’s had in 2014. Technical specs include the twelve core AMD A10-7870K processor at impressive 3.9GHz speed up to 4.1GHz with turbo, a solid hybrid drive of 1TB SATA hard drive at faster 7200rpm rotating speed and 120GB Solid State Drive so you have both lots of storage for your videos, photos and games and snappy performance, 8GB DDR3L SDRAM for superior multitasking power and genuine 64-bit Windows 10 Pro operating system installed on the SSD, with great new user friendly functions to make your life easier. Warranty included is the standard one year for parts and labor that you get for most new computers in US but you’ll also receive technical support for life. 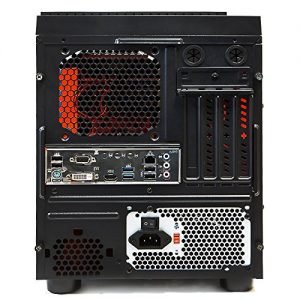 You can compare this machine to an average Intel i5 processor with a mid-range dedicated NVIDIA graphics card (also comparable with the a FX-6300 and R7 240 graphics) so you can do quite a lot with it including playing some of the games of 2016 at acceptable settings and frames per second (Battlefield 4 and League of Legends at medium to high settings) and there will rarely be lagging or freezing in your general tasks. Black and red SkyTech HellFire has a rather modern design despite being a little boxy which is also quite unique and has red LED lights at the front, weighs 25 pounds and measures 15.25 x 13.75 x 10.25 inches- is compact enough to fit in smaller and tighter spaces but is wider than normal. There is obviously no monitor, but no keyboard / mouse combo either but a decent range of connectivity including a 24X DVD ±RW Optical Drive, 6 x USB 2.0 ports, 2 x USB 3.0 ports for faster data transfers, an HDMI output, a DVI output, 1 x D-Port and is WiFi ready. You can switch the power option to higher performance for this machine to go into turbo mode and 4.1GHz speed for gaming or other demanding stuff- you will get your work done faster and will be able to play some games, but it seems to run quietly even when handling heavy loads.