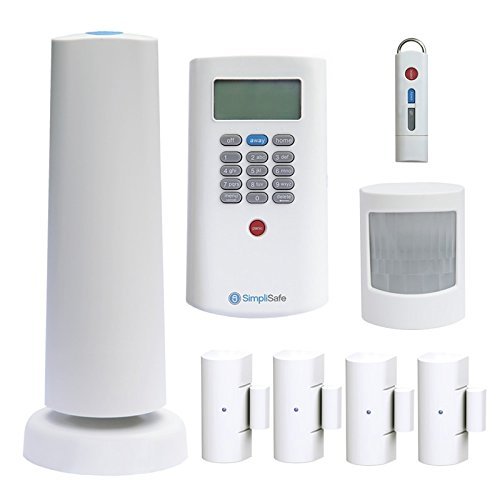 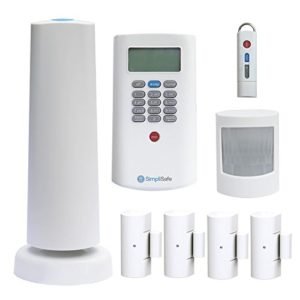 SimpliSafe2 SSCS2 is a modern wireless no-contract home security system that costs less than half the regular security systems, that you can install within less than an hour. The item we’re reviewing on this page is the 8-piece Plus model, you get the components from Amazon.com and the only thing that you plug in is the base station, the rest of the components you will stick up with the sticks tabs provided- there is no drilling in to the walls and even when the power is out the base station has the backup (power outage protection), will stay on and all the devices communicate wirelessly to each other. As an automated home security system it senses when someone enters and then calls, sends texts or emails you or calls the police and even stores the recording in the cloud so there is always a backup.

White SimpliSafe2 weighs 4.1 pounds and measures 13.1 x 12.5 x 6.5 inches and is a nice looking and attractive system overall that was first created as an apartment home security system- even though apartments are a lot less likely to be broken into there are also a lot less home security systems for apartments. It is portable- you can have it anywhere as it is also completely wireless. Design is perhaps not super modern or anything but this system is more about functionality and seems to have rather thoughtful bits and pieces. The tower- base station has a simcard in it just like your smart phone and you’ll be able to call for help if you have any trouble. In the box you will find the base station, keypad (even if the keypad is smashed system will still function as the base station contains the brains unlike other systems on the market and you can have multiple keypads for your front and back doors), a motion sensor to detect motion (works by sensing the heat of humans, not pets) within 30 feet, four entry sensors, a keychain remote and two window decals.

It is a rather comprehensive security system and you can integrate a lot of cool gadgets into it. You have the motion detectors, emergency panic button that you can keep next to your bed for peace of mind, keychain remote, water sensor- leak detector, freeze sensor, wireless keypad with duress code (if someone is forcing you to deactivate the system it will deactivate but police will also be on its way), carbon monoxide detection and window and door entry sensors- you can add many other additional sensors a la carte (supports up to 41 sensors).  You buy the system and install it wherever you are and you get the service as long or as little as you want. As the base station has the integrated cellular module so you do not need a landline to get your alarm signals to the 24/7 monitoring centre. When a sensor gets stripped it sends a wireless signal to the hub which uses an integrated cellular antenna to call a SimpliSafe operator, who will then call you on phone or email in seconds or call the police and you will know what is happening in your house no matter where you are and this is more than just burglary protection (SimpliSafe1 was for burglary). 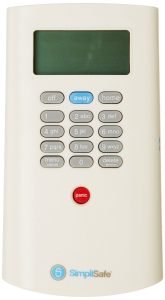 Simplisafe2 has the small battery powered sensors you can install anywhere in your house within just minutes and it is great to be able to give separate pin to let someone in. With keychain remote with all the software you may need and any changes you make you simply plug it right on top of the base station and it will adopt the changes you make. You use the keychain remote to turn the alarm on and off and base station will tell you when you turn it on or turn it off and reminds you when to change batteries, which is like every 5 years. You need to first create an account on the SimpliSafe website, plug in the base station and attach the sensors to your walls and door frames. It is very easy to set-up without needing to call anyone and factory default settings work very well and if you’re the kind of person that doesn’t like long contracts and don’t want to pay too much for a security system, then SimpliSafe2 is a nice one to consider- great technology, low cost, simple security and all wireless.