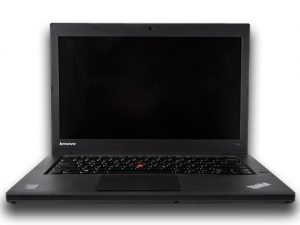 Black Lenovo Thinkpad T440 is a powerful and reliable ex-IBM quality 14 inch i3-4030U processor ultrabook laptop with Windows 7 Professional and a simplistic design at a budget price, that was selected the tenth best premium business laptop by Notebookreview. It is offered with two choices of 4GB or 8GB memory (if more of a power user) and three choices of 500GB, 250GB and 1TB hard drive. Lenovo Thinkpad T440 comes with the mid range dual core Haswell Intel i3-4030U CPU (3M Cache) at 1.9GHz speed without turbo boost, standard 4GB DDR3 SDRAM at 1600MHz on a single DIMM, 500GB Serial ATA hard drive at 7200rpm rotating speed which allows you to have access to your data quicker than the standard 5400rpm speed, 64-bit Professional Windows 7 operating system which would certainly please a lot of computer users and a free upgrade to the latest Win 8.1 is also included, not to mention the two releases of newer Win 10 coming out in Summer and Autumn this year.

14 inch diagonal anti-reflective LED backlit non-touch screen with 1366 x 768 pixel resolution is not Full HD and there is no IPS panel but TN panel and normal HD would be clearer and sharper on a smaller 14 inch display than 15.6 inch. Intel HD Graphics 4400 will let you play newer games like Battlefield 4 but at lower settings and low frame rates per second and older games like World of Warcraft and Dota 2 at higher. Dolby Advanced Audio v2 and built-in stereo speakers offer clear and crisp sound with clarity of dialogues and without distortion for premium sound. It comes with a 720p webcam with face-tracking and dim light sensitivity and with two noise-cancelling high definition microphones. Sleek and modern Thinkpad T440 weighs just 4 pounds and has the measurements of 13.35 x 9.15 x 0.83 inches, making it a very portable business notebook with up to 8 long hours of battery life from its double power bridge 3-cell lithium ion batteries (one of them is replaceable). Lenovo ThinkPad Standard Precision keyboard is not backlit and doesn’t have a numeric pad on the side but a large functional one piece touchpad pointing device, 802.11bgn wireless, 10/100/1000 Mbps Gigabit Ethernet with RJ-45, Bluetooth 4.0, 2 x USB 3.0 ports (and no slower USB 2.0 ports), integrated fingerprint reader for improved biometric security for your personal data and info to protect against ID theft and safer network access, 1x Mini DisplayPort (and no HDMI), 1x VGA port for projectors, 1/8″ Headphone/Microphone Combo Jack, Media Card Reader and there is no Optical Drive. 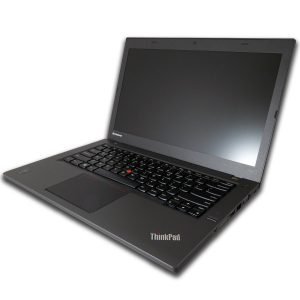 Conclusion: Lenovo Thinkpad T440 20B6009TUS has a compact 14 inch screen, a powerful yet energy efficient Spring 2014 release processor that has a Passmark benchmark of 2705 on this review day which means it can handle both the basic day-to-day and heavier tasks like photo editing and gaming up to a certain level (and has the TDP of 15 watts which helps with longer battery life), 4GB or 8GB RAM for how much multitasking power you may need in your daily tasks and different sizes of hard drives at 7200rpm spindle speed which is obviously a bit better than the 5400rpm speed but nowhere as fast as Solid State Drives and SSD is possible on this one by simply replacing the HDD. As you can imagine this is not a powerful gaming laptop but is designed more for office or school use but it doesn’t mean that you can not play some games or stream videos. It has only 2 USB ports but at least both of them are the USB 3.0 with up to 10 times faster transfer rates and there is no HDMI port by default but you can easily use an adapter and HDMI rather than miniDisplay would have been better. It looks good and build quality is great- carbon fiber top and magnesium bottom without making it heavier. You will find some junkware and utilities which is not a big deal as you can simply uninstall those you do not need through the control panel and you get 3 long years of warranty by Computer Upgrade King Lenovo is one of the best brands in computer industry and they have been creating great IBM notebooks over the years and the T440 is a decent computer that will improve your business productivity.