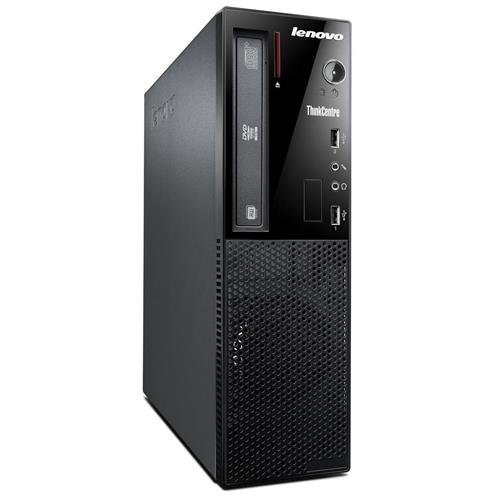 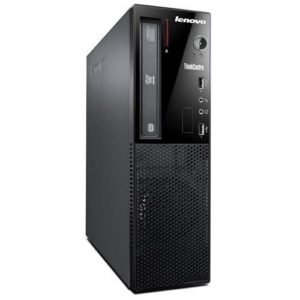 Lenovo ThinkCentre E73 is a compact and budget business desktop with mid range specs and a high performance quad core Intel i5-4460S processor at 2.9 to 3.9GHz speeds with turbo boost, average but sufficient 4GB DDR3L SDRAM at 1600MHz for some multitasking power and 500GB Serial ATA hard drive at 5400rpm rotating speed which still offers a fair amount of storage space and Windows 7 Pro that is also upgradeable to Windows 8.1 Pro (and free Windows 10 upgrade is also available till 29 July 2016). Passmark benchmark score for the i5-4460S is 6364 so you can expect quite a lot from it in terms of daily or demanding business or multimedia tasks and the Thermal Design Power- TDP is 65 watts, but is somewhat restricted by the lack of SSD and the memory size could be 8GB or so for better multitasking power but then again most people will not need that much for their daily tasks. You have the second slightly cheaper option- E73 10AU00ESUS with dual core Intel i3-4150 (3.5GHz speed, 3M cache, quarter 2 2014 release, Passmark score of 4900, 4 threads with hyperthreading, TDP of 54 watts and Intel HD 4400) on offer on the same Amazon product page and both processors were released in the second quarter of 2014. 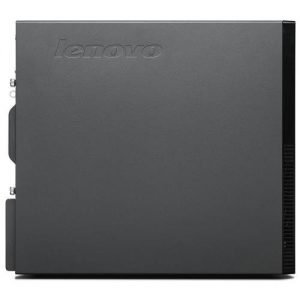 Glossy black Lenovo ThinkCentre looks sleek and modern, has a unique design with the rubber feet at the bottom and with vents at the front and back rather than sides for those that like to lay the E73 case flat and put the monitor on top, weighs 13.2 lbs and with measurements of 15 x 13.2 x 3.98 inches- so it is fairly lightweight and compact in size. Intel i5 model ThinkCentre E73 comes with the integrated Intel HD Graphics 4600 that is 30% faster than Intel HD 4000 in gaming benchmarks and up to 60% faster overall. It includes the DVD Optical Drive, Ethernet port with RJ-45 connector (no onboard WiFi according to specs listed), 2 x USB 3.0 ports, 4 x USB 2.0 ports, Handset, Headphone / microphone, older style VGA port to connect to external monitors and DisplayPort. You obviously won’t get the screen included but a USB keyboard and mouse combo with probably those curved Lenovo style for better and more accurate typing. It is quite easy to set up and you may want to upgrade Windows to the newer versions and once you start using you’ll realise how fast it runs and without delays or freezing and you’ll appreciate having such a powerful Haswell processor at low price level. This is a good value high performance computer with small flaws but a good set of  features that will satisfy a good percentage of customers.