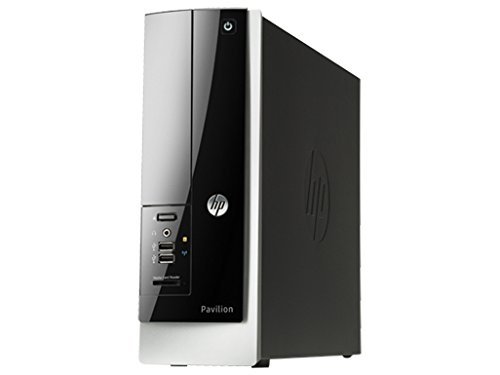 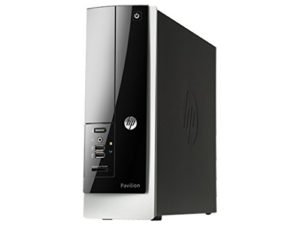 Black HP Pavilion 400-334 Slimline is an entry level low cost desktop PC with a beautiful slim design, a basic but capable mid-2013 release AMD E-Series Kabini processor, a Radeon HD 8240 graphics card, sufficient storage and memory, DVD Optical drive and 6 USB ports. HP Pavilion Slimline 400-334 comes with the dual core AMD E1-2500 processor (1MB L2 cache) at 1.4GHz speed without turbo boost or hyper threading, 4GB PC3-10600 DDR3 SDRAM that offers adequate multitasking at this level and can be expanded up to 16GB (two memory slots), 500GB Serial ATA hard drive at 7200 revolutions per minute rotating speed as good amount of storage for saving regular files and videos and faster opening of files and the pre-installed Windows 8.1 64-bit operating system as a stable platform for whatever you’re doing but is soon to be replaced by Windows 10 and you’ll be able to upgrade free of charge within a year of its release date.

Monitor is not included in this package and up to two monitors are supported by the integrated AMD Radeon HD 8240 graphics that shares the memory with the main CPU as it doesn’t have its own VRAM but helps with clear and crisp images. Decent audio is provided by DTS Sound+ HD audio with up to 5.1 surround sound, which is not spectacular but satisfactory. Black and grey HP Pavilion Slimline looks stylish and sleek, weighs 13.91 pounds and has the dimensions of 12.70 x 4.39 x 15.97 inches- won’t take up a lot of space on your under your desk and you’ll find a basic wired HP keyboard and mouse combo included in the box. It has no Bluetooth by default (it will cost as little as a few dollars to get a Bluetooth USB dongle), no HDMI and no Ethernet but 802.11bgn WLAN wireless for problem-free connection to internet without wires, DVD±RW/CD-RW drive with double-layer support, 6 x USB 2.0 ports, 7-in-1 Media Card Reader that supports SD, SDHC, SDXC, MS, MS Select, MS PRO and MS MagicGate formats, 2 Memory slots, a VGA port and Headphone/Microphone combo.

Conclusion: HP Pavilion Slimline 400-334 is a basic low end desktop PC designed for simple daily tasks with an AMD E1 processor with a Passmark score of 883 as of today. AMD E1-2500 is able to handle general daily multimedia and office tasks but is not so great in running very demanding games and software and the Radeon HD 8240 with a performance between Intel HD (Ivy Bridge) and HD 4000, so you can’t really play the modern games of 2013 and onwards. It works quietly and is good for emails, video streaming, playing music, web browsing, working on Microsoft Word and Excel and more, on a system that costs so little but what you’re getting is a laptop level system in a desktop case that is easy to set up and operate- it is quite a capable system and a good performer for the price and one of the users even commented on its 3D graphics performance but it is best to not expect a high end workstation here. You can upgrade the RAM up to 16GB but not so easily the other components. You’ll get software like CyberLink PhotoDirector, CyberLink PowerDirector as well as the 1 month trial version of Microsoft Office 365 pre-installed and a standard 1 year limited parts and labor warranty. It comes with some bloatware that would slow down the system so you’ll be better off removing those you don’t need and things will run smoother. It is a good value basic system for the price.