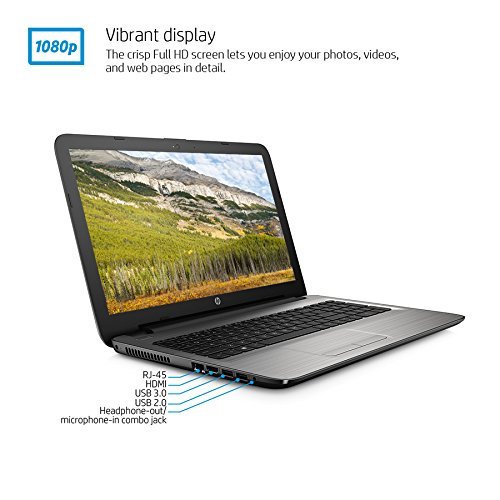 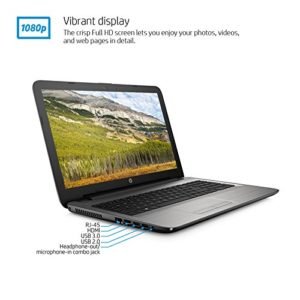 HP 15-ay013nr is a newly released low cost 15.6 inch Full HD laptop with modern technical specs and user friendly features for work, school and entertainment with dependable power and speed. It comes with the latest dual core ultra low voltage sixth generation- Skylake Intel i5-6200U processor (3MB L3 cache) at 2.3GHz speed that moves up to 2.8GHz with turbo boost, 8GB DDR3L SDRAM memory on a single DIMM for multitasking power, 128GB M.2 Solid State Drive instead of a mechanical hard drive as good enough storage space and very high speed that shows itself in overall performance with everything loading much faster as well and Windows 10 operating system that is much preferred to the Windows 8 and 8.1. With a Passmark benchmark score of just over 3900 Intel i5-6200U is both an ultra low voltage dual core processor but one that still offers a good deal of power and performance making it suitable for even the advanced users to run their more demanding software and both the large 8GB memory and 128GB SSD help with overall performance and there won’t be any lagging. Connectivity options include the Super-Multi DVD Burner that reads and writes to DVD’s and CD’s, 802.11ac wireless adapter for improved quality internet access, Bluetooth 4.0, Gigabit Ethernet and RJ-45 connector for wired internet access, a USB 3.0 port, 2 x USB 2.0 ports, a Media Card Reader and an HDMI output. 128GB may seem to be a small as storage but there is always Cloud storage and memory sticks both of which will accommodate a lot of data. 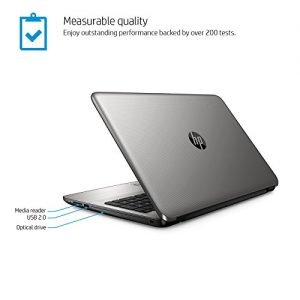 Turbo silver HP 15-ay013nr weighs 4.65 pounds and measures 15.12 x 10.02 x 0.95 inches- fairly lightweight and slim for a 15.6 inch computer so you can take it wherever you go. 15.6 inch SVA antiglare WLED-backlit FHD display with 1920 x 1080 pixel resolution for crisp and clear images, sharp texts, vibrant colours for photos, videos and web pages- so you can see everything clearly and in detail. Graphics card is the modern built-in Intel HD 520 that will run even the current games but at low settings and lower frame rates per second. Full HD non-touch display is one of this machine’s major selling points as it is quite rare to have one at this low price and you will not only have much sharper texts and images but also the ability to have two browsers on the screen at the same time. It offers premium immersive sound through the dual stereo speakers for your music and videos and there is a decent HD TrueVision HD webcam on the screen bezel so you can chat on Skype or take normal photos. Battery life is specified as 7 hours and 15 minutes on computer specs and features as this is an ULV processor and you should easily expect at least 5 to 6 hours at normal brightness and in regular usage. You have a low cost machine that offers quite a bit for the price tag and the main compromise made here is the lack of a dedicated graphics card so you should look elsewhere if you’re into heavy gaming- into machines that include at least a mid-range dedicated GPU and that cost much more. So this HP is good for just about anyone including advanced users but not the gamers: Fast SSD, Full HD display, 8GB memory for multitasking power and the very modern 6th generation Intel i5 processor, this is a computer that offers very good performance proven by more than 200 tests.