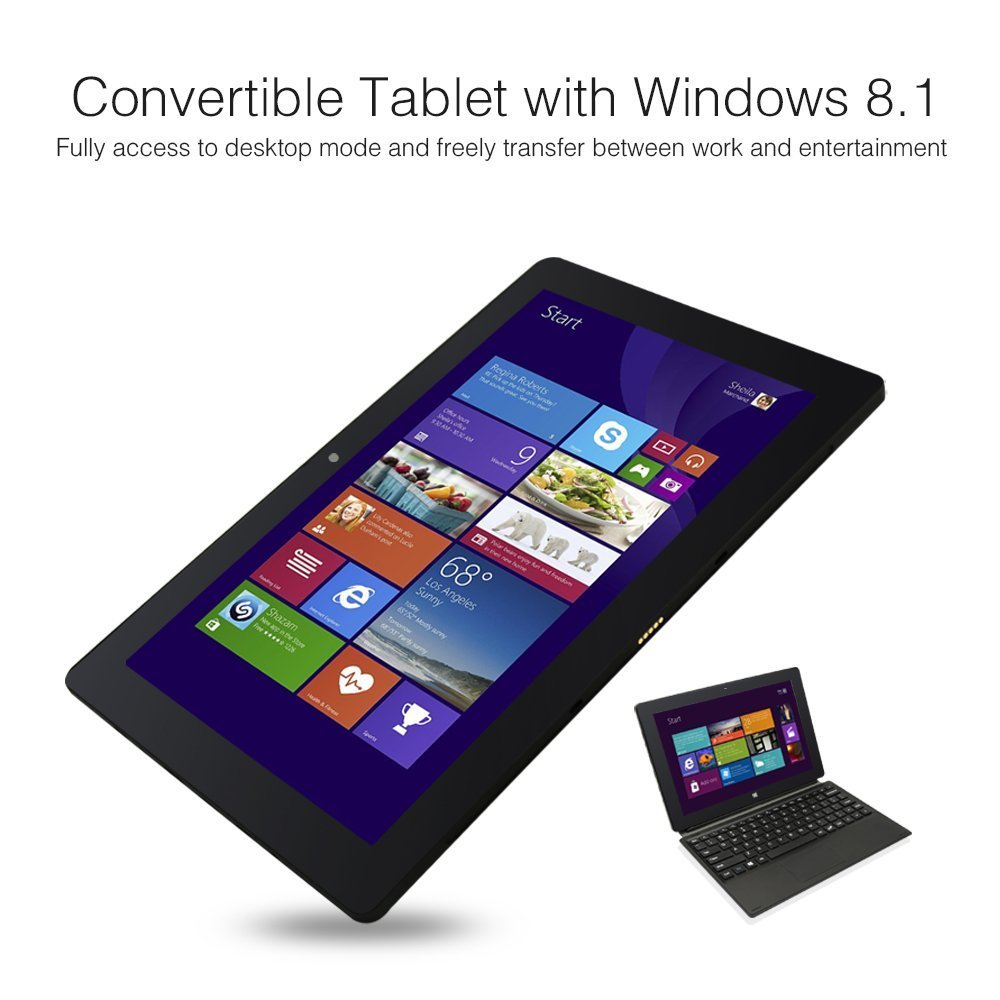 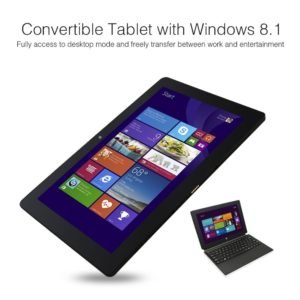 Dragon Touch i10X is a 10.1 inch 2-in-1 convertible Windows tablet and laptop PC with an impressive overall performance, a removable Bluetooth keyboard cover (case with the integrated magnetic keyboard) and decent battery life of up to 8 hours. You will find the Dragon Touch tablet, User Guide, USB cable and AC Adapter in the box with free Microsoft Office 365- Word, Excel and PowerPoint for 12 months.

Dragon Touch i10X has the reliable and energy efficient quad core Intel Baytrail-T Z3735 processor at 1.33GHz to 1.83GHz speed with smart four way responsive and smooth processing able to run things up to 4 times faster than a once core processor, 2GB DDR3L SDRAM as good amount of memory for more fluid multitasking especially for a tablet when switching between apps, 64GB hard drive (45GB is usable) to save files directly on the tablet and Windows 8.1 operating system with many apps so that you have a proper notebook experience in a slim and stylish tablet form. The i10X tablet with soft matte back is comfy to hold, weighs only 1.2 pounds and has the dimensions of 10.60 x 6.70 x 0.40 inches- is thicker and heavier than iPad but as compared to a regular laptop it is much lighter and more portable. You can get up to 8 hours of battery life from its 7900 mAh battery to use it for video playing an similar tasks. To connect peripherals in different ways- with or without wires you have the 802.11bgn wireless, Bluetooth 4.0, Mini HDMI, Micro USB, Micro SD Card Slot (you can expand the storage by about 32GB) and G-sensor.

10.1 inch high definition IPS Display with 1280×800 pixel resolution means clear and crisp text with vivid and rich colours and great viewing angles at up to 178 degrees vertically and horizontally. You can browse through web pages pretty quickly with minimal lag and play not so demanding games just fine but you can’t expect the same graphics performance levels of the much more expensive tablets like iPad 2 and HD videos on YouTube play quite smoothly. It has a 2.0 megapixel front camera for live video chats and a stronger 5.0 megapixel rear camera with AutoFocus for taking clear still shots but not as clear as pro cameras or iPhone. Sound quality is not the best through the two speakers at the rear and you will need to use external Bluetooth speakers or headphones for better sound.

Conclusion: Dragon Touch i10X transforms from a tablet to a laptop easily with the detachable Bluetooth non-backlit keyboard cover which is great if you need more than just a tablet for play as you can imagine to type up emails or Word documents you will need more than just a tablet. It has a well functioning proper keyboard with natural laptop feeling keys that connects to screen magnetically and you can easily transfer between the two forms for entertainment and work. There aren’t as many apps on the Windows store as Android or Apple but still plenty and they are quickly catching up. Screen is obviously not the Retina resolution of iPad but still vivid and colourful with large viewing angles for both work and entertainment- word processing, video streaming, games and more. Many people don’t love the Windows 8 or 8.1 but it sure is much nicer to use on a touch tablet than a standard non-touch computer and this is real Win 8.1 and not the limited Win RT version. MicroUSB port can not be used as a charger and you need to use the included barrel charger. Overall performance is quite good, works just like a laptop when needed with the included keyboard and full Windows 8.1, battery lasts long and if you’re looking to get into a Windows based tablet with keyboard cover, the i10X is a cheaper way.