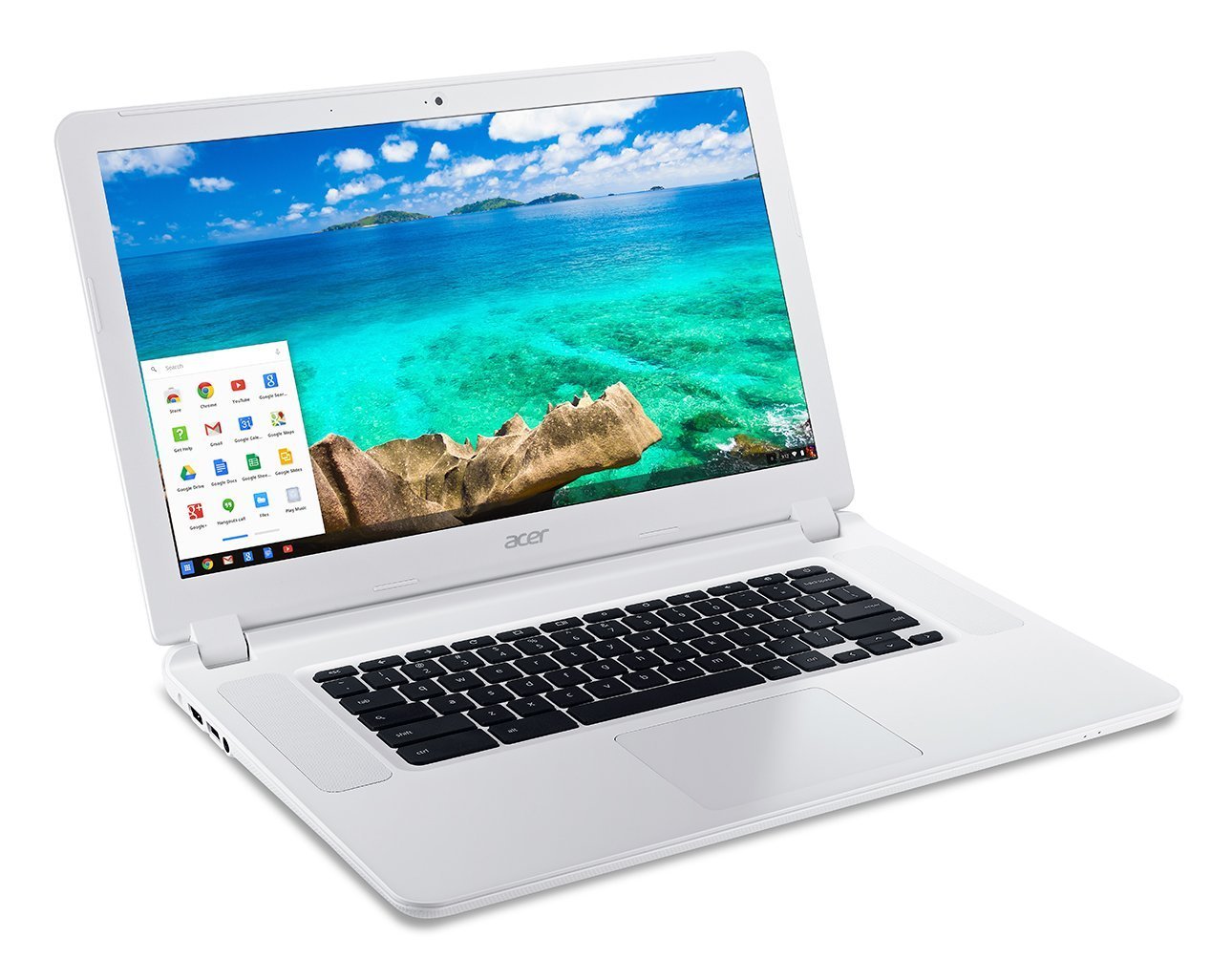 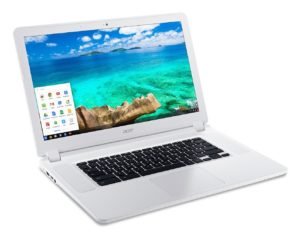 Linen white Acer CB5-571-C09S is the new large screen 15.6 inch Chromebook by Acer with a beautiful Full HD IPS display, a decent 5th generation Celeron processor and 4GB memory to handle heavier multitasking but a 32GB SSD so it is still the low cost web-connected device for those that like relying on Cloud for storage as you know pretty much everything happens on the internet on Chrome OS. It has a proper full-size keyboard with a responsive trackpad, fast 802.11ac wireless, beautiful sound with great speakers, up to 10 hours of battery life but not many ports and not as sleek as portable as the smaller Chromebook’s so it is more of a desktop replacement machine as the biggest Chrome OS computer so far. The CB5-571-C1DZ is the same model but with a 16GB Solid State Drive

Chromebook CB5-571-C09S comes with the January 2015 release dual core Broadwell Intel Celeron 3205U processor at 1.5GHz base speed with no hyper threading or turbo boost so you have two cores and at the fixed base speed, 4 GB DDR3L SDRAM for enhanced multitasking capabilities as 4GB is quite a bit for a budget Chrome machine, 32 GB Solid-State Drive to boot-up faster- in just 7 seconds and wake up from hibernation plus 100GB of Cloud based Google Drive free for two years and you’ll have quick access to your standard and multimedia files in no time and the Chrome operating system. The Celeron processor and the 4GB RAM are quite capable for daily use and multitasking and you won’t really be experiencing any delays or freezing even with 10-20 browsers open and thing will run smoothly.

15.6-Inch Full HD IPS widescreen LED-backlit matte display with 1920×1080 pixel resolution offers very sharp, clear, bright and crisp images with vivid colours, 16:9 cinematic image aspect ratio and up to 178 degree large viewing angles vertically or horizontally so you have something quite special here in terms of display and do bear in mind that both FHD and IPS features cost money and you’re getting a pretty good deal here, considering even the Chrome machines with FHD screens have the lower quality TN displays. Graphics card is the low end Broadwell Intel HD graphics that offers similar performance to Intel HD 4000 and is a bit better than the HD Graphics Haswell so you’ll be fine with Chrome OS type multimedia and gaming but if it was a Windows machine you’d be able to play only a few of the latest games and at low settings and resolutions. It comes with a HDR high-dynamic-range-imaging webcam with 1280×720 resolution with an integrated microphone just above the display for taking still photos or live video chats on Google Hangouts. The full-sized speakers are placed facing upwards on both sides of the keyboard and this may look weird to you at first but they offer full immersive sound that is very loud and clear at a quality you would not expect from such a low cost machine. 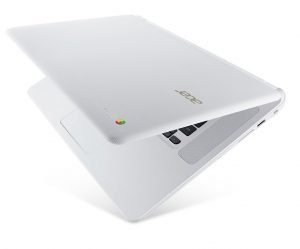 Linen white Chromebook 15 is made of solid plastic (as you can’t really have aluminium at this price level) and has a textured matte material on the lid but a smooth finish and feel around the screen and keyboard- it feels reasonably well-made and certainly better than the smaller Acer Chrome laptops. It measures 15.1 x 9.7 x 0.95 inches and weighs 4.9 pounds so it is not as compact or portable as the other 11 and 13 inch models and feels bulkier but you have the advantage of having a spacious FHD IPS screen   and a comfortable panel to lay your wrists when you’re working on the computer. Keyboard is full-sized and comfortable with chiclet style keys that are spaced out nicely, doesn’t have a numeric pad but large speakers on both sides instead as well as an effective and responsive trackpad. You’ll get up to 9 hours of battery life from its 4-cell lithium ion battery, which is quite impressive considering the power of the machine, quality of display and the size. There is no Optical DVD drive on this Chromebook but 802.11AC wireless for 3 times faster connection and wider coverage featuring MIMO technology (Dual-Band 2.4GHz and 5GHz) so everything will load faster online, Bluetooth 4.0, a USB 3.0 port, a USB 2.0 port, an HDMI port, a Secure Digital (SD) card reader that supports up to 128GB SDXC.

Conclusion: Acer Chromebook 15 CB5-571-C09S is a midrange Chromebook that is better than all the low end Chromebook’s but naturally not as powerful as the high end 1000 dollar Chromebook Pixel and as long as you don’t mind a little more bulk than the smaller models and relying on Cloud then this is a great machine. But don’t expect the same level of performance you’d get from the Intel i5 or i7 plus larger amounts of RAM that you have on the Pixel and just think about how much you’re paying for this machine and what you’re being offered in return. Those that like more viewing space on screen and have a few windows open side by side will appreciate the 15.6 inch screen rather than previous smaller 11 or 13 inch Chrome displays. Acer claims up to 9 hours of battery life and you will easily get 8 hours on average use at the default brightness of 63% so if you go dimmer then you’ll have your 9 hours on single charge and no matter what you do it manages to stay relatively cool to touch and run quietly- you would have to really listen to it by getting your ear close to the bottom panel and all you’ll hear is a faint fan noise. We like the 2 year free Cloud based Google Drive storage which is worth a total of 48 dollars and you will have your files safe after this period but your free allowance will go down to 15GB, nice and capable Broadwell Intel processor, good amount of memory, Full HD IPS display, great sound through large speakers and the fast 802.11ac WiFi and this would be the right Chromebook to have if you will be using the computer mainly for internet and you don’t mind not having Windows operating system.